“Those who cling to worthless idols forfeit the grace that could be theirs.” -Jonah 2:8

I was born in Kansas and when I was five our family moved to Arizona. I grew up in a home that I would call a “Leave it to Beaver” type of home. My parents are wonderful people who made family their top priority and loved my brother and I unconditionally. We went to church regularly, but it was more of a religious training experience than a personal relationship with Christ.

At 21, I became acquainted with a guy who has become one of my best friends. He explained to me what it meant to have a personal relationship with God through the person of Jesus Christ. Although this made more sense than the unfulfilling traditional religion, which I had always been involved with, I still wanted to live my life my way. In my 20’s, I repeatedly rejected the gospel of Jesus Christ understanding fully that if I died, I would spend

I figured that that these “Born Again” Christians were just using God as a crutch because they were too weak to handle life on their own. Arrogantly, I wanted any success I might have to be credited to me and not to God.

I got married at age 22, became a financial planner at age 24 and set extremely ambitious goals. I was full of selfish ambition. It was not uncommon for me to work 60 to 80 hour weeks, and everything in my career seemed to be falling into place.

After the divorce, I sold virtually everything but a car, and moved back home with my parents at age 29. We got divorced and I was humbled in a way I that I had never experienced. At that low point I understood for the first time that I needed God. I accepted Jesus Christ as my personal Lord and Savior, and asked him to take control of my life.

I remarried in 1993 to a wonderful gal named Juli. However, although I was now “born again”, I was still operating under my own power, often focusing on filling my head with Biblical information without letting it penetrate my heart. I was frequently angry and critical of Juli. She tells me now that early in our marriage, she frequently cried herself to sleep at night. I was completely blind to my problem, and almost no one else saw it, because it was directed almost exclusively at Juli.

Each morning I generally spent some time reading the Bible. In 1999 God laid on my heart the desire to spend some of this time each morning asking Him to show me my blind spots.

Search me, O God, and know my heart
Test me and know my anxious thoughts
See if there is any offensive way in me,
and lead me in the way everlasting

One morning Juli and I began arguing. As I realized that she was not going to see things my way, I paused during the argument, and looked over to our living room and saw a ceramic dish, and did something I had never done before: I grabbed the dish and threw it down on the tile floor, smashing it into hundreds of pieces.

At the exact moment that my arm came down, our oldest son, Daniel, who at that time was four years old, walked around the corner. He saw me in a rage, smashing the dish on the ground, and became hysterical. He jumped up and down, crying and screaming and waving his arms.

Immediately, God answered my prayers and showed me how he saw me: a man still in bondage to pride, which was revealed by my anger. God showed me my sin in terms that I could understand through the eyes of my son. He showed me that if I continued with this sinful behavior I would not only damage another marriage, this time I was going to take my kids down with it.

I confessed the sin and repented of it. I didn’t feel just a little bit sorry for it; I hated it. I hated the sin because God hated it, and I wanted to get rid of it because He wanted me to get rid of it. But, honestly, I felt helpless in ever getting rid of it.

About three months later, Juli came up to me and said “Kevin, what has happened to your anger?” I was somewhat defensive, and said “What do you mean?”. She said, “Kevin, It’s not there anymore! Your face doesn’t get tense and you never explode at me and the kids anymore!”

I was completely unaware that anything had happened. I was not faking it or bottling it up inside; God had simply taken away my anger. We both knew God had changed me in a miraculous way!

As I look back now, I can see that I was in a spiritual state of brokenness, humility and repentance where I could be healed by the counselor – God’s Holy Spirit. As I humbled myself, the place in my heart once filled with pride, became filled with the Holy Spirit.

I was so overwhelmed by what God did, that I began asking Him what he wanted me to do next.

God began to show me things I needed to make right. I went to three people with whom I had strained relationships and apologized for my part in the strain and God restored the relationships. He led me to make financial restitution in a business deal I made many years before in which I was dishonest. He led me to return an item I had stolen from a friend when we were kids.

At age 40, after more than 10 years as a Christian, I began to see what it REALLY means to surrender to God.

This caused me to ask the question: What if I did something that, for me, would be completely radical? What if I began surrendering everything to him every day? Instead of saying, “This is my agenda; God please come over here and bless it”, what if I said, “Lord what is your agenda? Show it to me and I will follow you. Fill me with your Holy Spirit to enable me to do it.” And the changes He has been making in me and our lives over the past few years have been wonderful!

My pride and selfish ambition said we should be moving up occasionally to a bigger and better home. God said, surrender your plans to me, and I’ll make you content right where you are. And he has.

My pride and arrogance says there are a lot of tasks beneath me at home and work. God said, no, surrender to me and I will begin teaching you humility. Do some of those chores yourself, and I will show you how to enjoy serving Me. And recently He has begun that process, although there is still a long way to go.

My fear and anxiety said I needed to work long hours, evenings, and some Saturdays. God said, “No, surrender your career to me because it’s mine, not yours. Do not work weekends, plus, take a day off from work occasionally, relax and spend it in solitude with me.” And he has removed most of those fears and anxieties.

My selfishness said ‘two kids are enough’, while my wife wanted three. God said, “No, surrender this to me and I will decide.” He decided my wife was right–Again!–that three is the right number of kids for us. And I would not want it any other way.

I still mess up regularly, occasionally I get angry, and I’m still a work in process, but my wife says God has completely changed me, and that our home is a happier place to live as I have begun learning how to surrender to God’s will, abide in Jesus, and seek to be continuously filled with the Holy Spirit. And I am so grateful to Him! 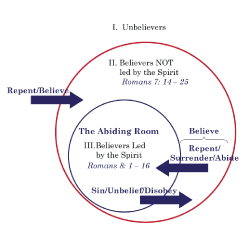